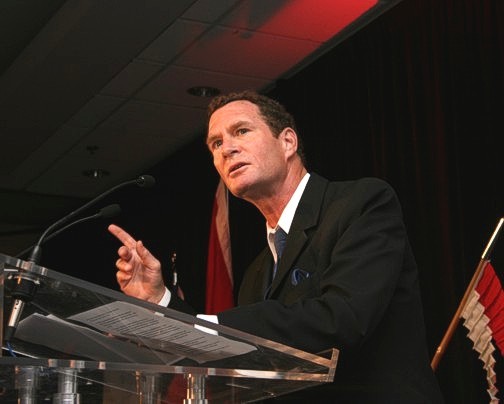 Gould delivers keynote at RCMP Officer of the Year Awards

For information about booking Terry Gould as a speaker, contact:

We would like to express our gratitude for your keynote address to our 9th Surrey Chamber of Commerce RCMP Officer of the Year Awards gala event, and endorse you as a speaker who must be heard.

Your presentation "What Cops Know" was a poignant, straight-forward description of the serious shortcomings of the Canadian Justice system with implications that suggest not just systemic indifference or bureaucratic and political bungling, but outright compromise.

As could be seen from the audience reaction your message was presented in an extremely interesting and compelling way which coveys both your dedication to the pursuit of the truth and an uncompromising attitude to telling it exactly as it is.

"What Cops Know" combined with your book, Paper Fan, are required primers for those who care about justice in Canada.

The conference was a huge success and Terry's portion certainly added to it. He did an awesome job and after reading the 300 evaluations forms, not one person has a negative comment. He was rated very good to excellent in all seven categories for "effectiveness, enthusiasm, knowledge, coverage, communication skills, maintaining interest and conveying an attitude of respect. In a scale of 1 to 7 for not meeting expectations (1) to exceeds expectations (7) he received either 6's or 7's. The audience Terry had are a tough crowd. They normally rate presenters fairly but honestly. I encourage them to be that way as I will make future decisions based on what they say. To get this high a score shows just how well Terry's topic was received and speaks to his skills as a presenter.

Law enforcement budgets often don't allow the luxury of bringing in keynote speakers but in this case, it was definitely worth the money.

Our conference was a great success and one of the comments from a person in the audience was "You saved the best Speaker for last".

Thank you so much for your presentation yesterday. It was a huge success. Hopefully we'll be working with you in the near future.

We debriefed the event last week, and all of the committee members mentioned how impressed they were with Terry's speech. The topic was perfect for the audience. I personally liked how Terry shows so much passion when he speaks, which is critical to a successful presentation. The RCMP in attendance were appreciative of his understanding of what they go through and his honesty in pointing out some of the faults in our justice system. Terry is a very engaging speaker and leaves the audience wanting more.

This speaker was very well received and the audience had a lot of questions for him after the session. His appreciation of their interest was genuine and we very much enjoyed having him at our event. As soon as we were back at the office the following week one of the attendees wanted the contact info to book him at their upcoming event. Praise doesn't get much better than that.