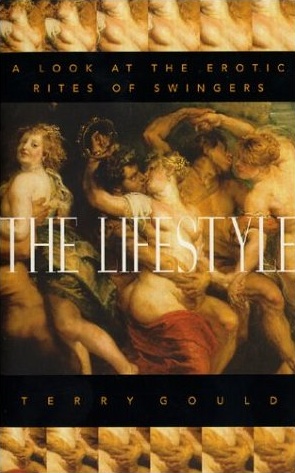 "Investigative journalist Gould paints a fascinating and sympathetic portrait of swinger culture..... Gould's approach is tasteful, and his book is one of the few descriptive works in print on consensual non-monogamy. It can serve researchers well. General readers will be riveted." -- Library Journal of the American Library Association

NATIONAL BESTSELLER
NO. 2 ON AMAZON.COM'S MOVERS AND SHAKERS BESTSELLER LIST
PROFILED ON ABC'S 20/20 AND CBS'S 48 HOURS.

The Lifestyle, first published in early 1999, broke the story that millions of middle-class married couples in North America belonged to a worldwide subculture that the media had dismissed as "swinging"--a misfit relic of the 1960s--but which was (and still is) much more than that to its heartland members. It's "he lifestyle"--the name mainstream couples give to their worldwide movement, whose rules of open eroticism and spouse-sharing are as paradoxically formal as those governing any service organization.

The book revealed for the first time that the vast majority of "lifestyle" couples lived conservatively in every other aspect of their lives; that there were more than 400 formally affiliated lifestyle clubs in 24 countries; that the subculture had an overseeing organization, a multimillion-dollar travel industry, and over a dozen four-star holiday resorts in Mexico and the Caribbean that catered to their needs. Large lifestyle conventions were (and still are) held a over dozen times a year in eight U.S. states, monopolizing entire resorts for four days at a time, the biggest drawing 3,500 people from 437 cities in seven countries. At one, Gould found, a third of the participants had post-graduate degrees, almost a third voted Republican, and forty percent considered themselves practicing Protestants, Catholics, or Jews.

Until the publication of The Lifestyle, the mainstream media had ignored or dismissed this mainstream story--which was part of the story itself.

Terry Gould investigated the movement using the same skills he'd used for years to investigate underground criminal groups, but with a twist: this group was in the wide open, its participants not only law-abiding citizens but often members of law enforcement.

Praise for The Lifestyle from Critics and Science Writers

"Gould has drawn our attention to a form of sexuality that has escaped social scientific notice for the past several years, and he does so in a way that neither belittles or glorifies. He is to be congratulated."
-- Journal of Sex Research

"The Lifestyle is a delight to read--a ground breaking and honest work of journalism that thoroughly explains why millions of people are part of this subculture called "swinging". Indeed, Terry Gould has accomplished something rare: his extensive research into the anthropology and sociobiology of spouse exchange has allowed him to broaden his descriptions of swing parties to include deeply significant explanations for what takes place at them. Few journalists have gained permission to enter that world, and none have explained it in such depth. The Lifestyle is an entertaining, on-the-scene narrative, but it is also a serious work which should be read by all who want to understand what this growing phenomenon is all about."
-- Josef Skala, M.D., Ph.D., FRCP(C), Professor Emeritus, Faculty of Medicine, University of British Columbia; Visiting Professor of Medicine, Charles University of Prague, Czech Republic. (Medical advisor to Terry Gould's The Lifestyle.)

"Gould presents a plethora of intriguing and engaging arguments for reexamining some of our most deeply held beliefs about sex, morality and ethics."
--Quill and Quire

"Almost everything you wanted to know about swinging sex, but were afraid to ask.... [Gould] brings swinging out of the closet as he argues that consenting adults should not be denigrated for engaging in private behavior that (he claims) harms no one. Through a history of the Lifestyles Organization and interviews with swingers (mostly married couples), Gould depicts a world refreshing in its sincerity, openness, and normality in spite of such apparent contradictions as swinging Mormons or Republicans. The view that emerges of the Lifestyle is one of hedonism, but an ethical hedonism in which individual choices are respected and boundaries never crossed without permission.... Gould humanizes a marginalized community and demonstrates that sexual expression does not automatically equate with deviance."
-- Kirkus Reviews

"If you thought swinging went out with the '70s, guess again. The "lifestyle" is three million strong in North America, according to Canadian journalist Gould, with crowded conventions, an anti-defamation league and thousands of Web sites. The investigative magazine reporter tells us that he initially approached the topic with the same suspicion he employs for his usual subject--the shadowy underworld of organized crime. But after spending a few years exploring America's swinging playgrounds and interviewing scores of "playcouples", he now vigorously defends the lifestyle against the charges of feminists who say it's demeaning, religious leaders who say it's immoral and a press that looks down its elitist nose at the suburban phenomenon."
-- Publisher's Weekly

"By taking the subject of non-monogamy seriously, Terry Gould shines a warm light on a large and fascinating middle-class subculture that almost no one knows anything about. Clearly, this is a grup with a lot to teach all of us."
-- Marty Klein, Ph.D., Conference Program Chair, Society for the Scientific Study of Sexuality

"We consider The Lifestyle to be the best reportorial work yet produced on swinging.... This most uncommon book is a must-read for any person who likes to think about or talk about the social, psychological, or cultural implications of swinging."
-- theswinginglife.com

"It will not convert you to becoming a swinger, or to joining a club, but it will make you think about monogamy, fidelity, and sex as a form of recreation within a marriage. If you're curious, if you've always wondered about it, if you've got friends involved in swinging and you think you might like to try it, do read The Lifestyle."
-- Sue Johanson, R.N., host of "The Sunday Night Sex Show," Women's Television Network

"Gould has fashioned his extensive research on the phenomenon into a timely, serious, useful book."
-- Toronto Star

Praise for The Lifestyle

"Gould presents a plethora of intriguing and engaging arguments for re-examining some of our most deeply held beliefs about sex, morality and ethics."
-- Quill and Quire